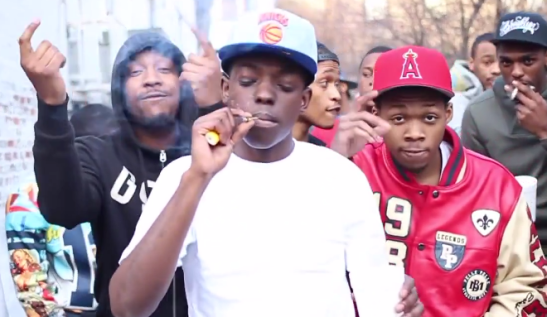 YT Triz ft/Bobby Shmurda, ‘How Can I Lose‘. How can he lose when he came here with nothing? Fair question on fierce track featuring the summer’s most controversial ign’ant trap rapper Bobby Shmurda.

Young Zee ft/Rah Digga, ‘One To The Body‘. Love the lopsided beat, conflicted about the hate towards Macklemore. On the one hand Mack’s clearly a legitimate target, on the other hand saying he should do a tour called ‘I’m A Faggot’ backfires by making him sound more interesting than he actually is.

Chester P, ‘Legends‘. Touching tribute to graff writer King Robbo who passed away on July 31 and more generally to all who follow in his footsteps practising ‘the realest artform on the planet‘.

Vic Mensa, ‘Wimme Nah‘. I quite like this BUT I sense dreadful things in the future of this young Virgin signee. Such premonitions not helped by the way Soundcloud autoplayed a crappy Coldplay remix for me after this track finished.

Yelawolf, ‘Honey Brown‘. Pleased to see Yelawolf didn’t get dropped from Shady after the tepid Radioactive, also pleased to hear this continues his recent run of decent form stretching back to last year’s Trunk Muzik Returns.