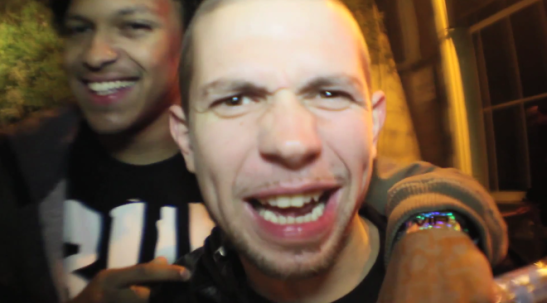 Perhaps the biggest problem I’ve had with Brighton rap over the years was the impression — prejudice — that the scene was, in the main, smug party rap. Y’know, tracks about going out and having a good time, a few comedown tunes. I suppose as well I suspected if I dug too deep there’d be severe danger of death by vegan hippie bullshit. Moustaches at dawn, bongos on the beach, that type of shit.

So it’s difficult to overstate how much of a pleasure it’s been over the last six months having those preconceptions blown apart by the widescreen crime dramas of this week’s Slipjam headliner Gizmo. I first encountered him live, earlier this year with his crew Rum Committee. A lot of people seemed to be tipping his compadre Ceezlin for big things, even more so now in the wake of his deal with new media magnates SBTV, but for me that night Giz was the star of the group.

The impression was only re-enforced listening at home through his only widely available project to date, ‘The Chronicles Of Blitz Murkury in 3D’. His voice as distinctive as I’d remembered, in his words ‘born a dirty urchin’, he growled his way through the beats with an urgency that wouldn’t lt you doubt it for a second. Lyrically he was impressively agile, switching from gangster posturing to what sounded suspiciously like sincere commentary on world issues. How else could you interpret the way he said ‘ain’t none of you motherfuckers getting my vote‘ at the end of ‘Polling Day’?

Party rap? Well, that kind of goes without saying. All hip-hop is party rap, and this is still Brighton after all. It’s just that Gizmo is better at it than most cos he realises that sinister is always way more entertaining than smug.

As usual, Slipjam is at The Hope. This month it’s a long player, so that means a late-ish running time of 9pm to 1am. Support comes from Frankie Stew + Harvey Gunn, plus Billy Cypher and Cloud9 on the beats for the open mic.

I’ve been to Slipjam 3-4 times this year and I think every time I went you were there and ripped the open mic. How long have you been going, have you been a regular ever since you first went, and why do you keep showing up?
I’ve been going to Slipjam for a long time actually, probably since about 2005. I always saw it as a place to brush up on my skills and I think the commitment to that paid off. I have seen other people benefit from regularly rapping in front of a crowd in an informal environment – it’s good practice. Nowadays I don’t actually get a chance to cipher too much, so I try get down when I can. It’s just the fun of freestyling in front of an audience and peers.
Was it the first place you got up on stage? How come you don’t get a chance to cipher so much these days?
I reckon yeah, it probably was the first time I rapped on stage, if it wasn’t I can’t remember what was. There was quite a high standard back then so I think if I did do something else first it would of endowed me with the confidence to rap at Slipjam (at the time). I don’t really cypher much these days because I spend most of my spare time making music. It’s kinda fun rapping with friends but its more fun drinking with them so when we do rap it always turns into some haha shit. Like this example, at my house:

I love the bit at the end when Tom Hines comes in, every time I’ve seen him rap till now it’s been on stage when he’s at his most professional. Are there any good videos out there of your own drunken master skills?
I wouldn’t say skills but there are a few on youtube of me very drunk doing something. I dunno if you could call it rapping really…haha… For some strange reason and I’m sure most rappers would agree, the magic happens when the cameras are off.
Okay, I’ll search those out and stick them at the top of this piece when it goes live.
I’ll help you with that… haha…


What’s the gameplan for Friday? Do you have a whole set worked out or are you planning to improvise a bit?
Friday will be a little of both, I’m gonna do a bunch of tracks from my forthcoming album “THE UNTOLD ADVENTURES OF GARY GUTTERSNYPES” and some other bits people might know, I’ll just play what I feel like and let it do it’s thing. I might even DJ for myself as well. Not 100% sure yet.
What’s the story behind the new album, then? Is it all ready to go? Is it another concept thing like Blitz Murkury? Is it going to be all original exclusive beats or are there going to be a few dubs on there?
The idea was conceived at the start of 2013, it’s something that has been LONG overdue. I have always wanted to make a big album and I just thought fuck it i’m gonna do it. It’s all original production which comes mainly from KD (Rum Com) and myself and I actually mixed all of the tracks myself as well. The only feature I have is Rag’n’Bone man singing a couple of hooks. Literally today I been thinking about the stuff that’s coming out at the moment and everybody seems to be taking it back to that stripped back Hip Hop sound but just big and heavy – crashy percussion and hard organs, horns, guitars ya know. That’s what my abum sounds like so I feel like I’m on the crest of something bigger like part of the next wave. There’s no concept but the tracks work very well together, I’ve tried to make something memorable with character that people will go back to. I wanted to make something that sounds and feels like it could be classic even if just to me I guess. METICULOUS DETAIL.
When you say like stuff that’s coming out at the moment, do you mean like American stuff or British stuff? What albums or tracks are you thinking of in particular?
British stuff particularly but off the top of my head, Ghostowns’ production on some of the Dead Players stuff and even the new Giggs/Mark Ronson joint has that sound. Its quite a broad spectrum actually, I don’t think it’s intentional but there is definitely something emerging. I reckon it sates a craving for that ‘raw sound’ and perhaps a much-needed facelift of (Hip Hop/Rap) in general is picking up momentum. A lot of the other stuff can get stale very quickly.
I loved the artwork you did for Blitz Murkury. Can we expect more of the same this time round? Would you consider doing a whole comic book with your album like Ghostface did earlier this year?
To be honest I do enjoy drawing but i’ve left it to Captain Bukioe this time. Maybe one day when I’m older and things are less hectic I would consider a big art project. I have a lot of storys and ideas.
One last question to bring it back Slipjam. What would your sales pitch be for anyone out there reading this with too many options on Friday night? Why should they come down? What do you bring to your show that they won’t be able to get any other place in Brighton this weekend?
I can only offer no pretense and a good fun place to come and be noisy/drunk, thats what other nights miss, its supposed to be fun right? The open mic is always a laugh/freak show. As far as the set goes I got a few tricks up my sleeve but all I can truly offer is the rumbustious energy of man possessed by dark spirits. Shhhafe.

This entry was posted on September 6, 2013 by Ringo P in 2wo 7even 3hree, Live From The UK, Ringo P and tagged Billy Cypher, Brighton, Cloud 9, Frankie Stewart + Harvey Gunn, Gizmo, Slipjam, Slipjam:B.