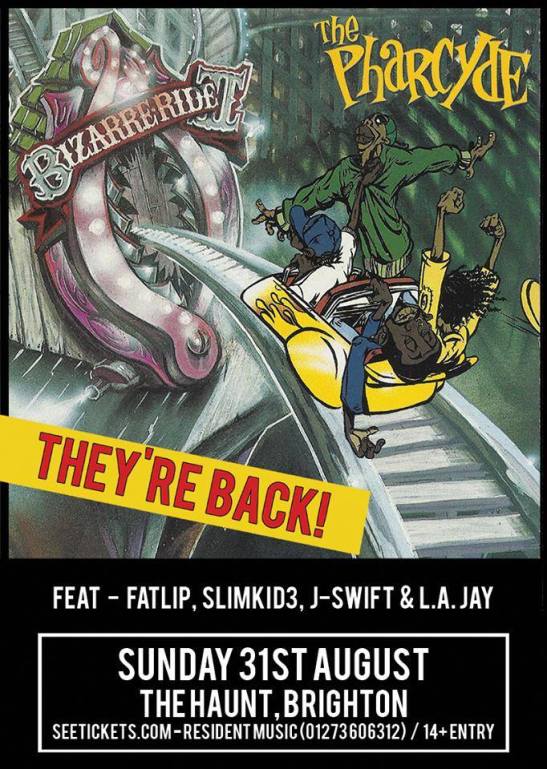 This one’s a puzzle for sure. A quick glance at the flyer and you might think it’s a show from The Pharcyde. That’s their album sleeve! Look closer at the list of performers and the story starts to get murky. Fatlip and Slimkid 3 are half of the original lineup of The Pharcyde. Fatlip left after the second album Labcabincalifornia (1995), Slimkid3 hung around for the follow up Plain Rap (2000). After he left the remaining members Bootie Brown and Imani released one more album, Humboldt Beginnings (2004), so my guess is this means they still own the name and these guys don’t have any legal right to call themselves The Pharcyde. That’s not to say this won’t be a great show. There’s also a pretty strong argument that it’s as authentic as anything the actual Pharcyde could put on given how the lineup is completed by the original in-house producer J-Swift (who produced the vast majority of Bizarre Ride II The Pharcyde) and L.A. Jay (who co-produced the one track on Bizarre Ride II The Pharcyde that J-Swift didn’t do).

3 comments on “Incoming: Bizarre Ride (NOT The Pharcyde) @ The Haunt, Sunday 31st August”

This entry was posted on July 4, 2014 by Ringo P in 2wo 7even 3hree, Live and Direct and tagged The Pharcyde.