Alchemist x Agallah – The Past and Present

Its nice that we’ve got through half of Sunday without Ringo pissing off somebody I know (although I’m looking around for something wooden to touch, just in case I jinx it). Anyways, here’s a new free album download from Alchemist and Agallah, who have taken some new beats, and on a couple of tracks, some old beats (if my ears don’t deceive me) and enlisted some big names to drops science on them, as well as dusting off their own mic skills on some of them. We’ve got Masta Ace, Sean P, Guilty Simpson, Thirstin Howl III and Roc Marciano to name a few, as well as the first track from Buc Fifty that I’ve heard for years. I must admit, I haven’t had a full listen to the release yet, but I’ve had a scan through, and it seems pretty thorough. I’m well acquainted with Alchemist’s beats, maybe not so much though with Agallah – the only track I seem to link with his name is an old one with R.A. the Rugged Man (who also pops up on this album) that I had on an old self-burned CD I made when I was about 19. Gonna give this one a full listen a bit later, but I think it should be worth downloading for anyone looking for some new music on a free wave.
• Koaste

• Download Alchemist x Agallah – The Past and Present OVER HERE 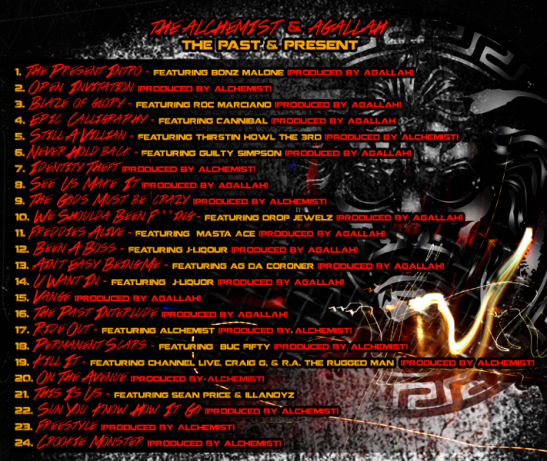 This entry was posted on January 19, 2014 by Koaste in New Release, Other Side of the Pond, The D is FREE, Where Has He Been? and tagged Agallah, Alchemist, Buc Fifty, Guilty Simpson, R.A. the Rugged Man, Roc Marciano, Sean Price, Thirstin Howl III.