Iggy Azalea will ‘Change Your Life’ by absorbing you into a state of perpetual orgasm. 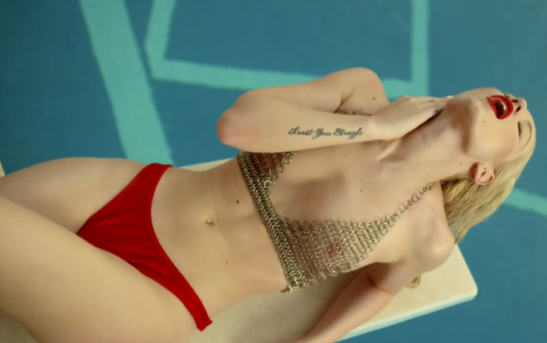 First thing this morning I was torn over whether I should write about the new Iggy Azalea single ‘Change Your Life‘. On the negative side it’s shit. I can’t imagine Big Bossman Koaste will like it much, either. Maybe it’s not quite shit in the way I expected. I’ve slagged off her rapping before, and thought it’s forgettable here it’s not as disgracefully awkward as it’s been in the past. This time round it’s more the bland mershality of that beat, surely interchangeable with any number of tracks from the latest albums by Tyga, Big Sean, Wale, or any of the other desperate mersh rappers fantasising about having Katy Perry’s creative team on the payroll.

On listening a second and third time I start to wonder if there might be some actual artistic mileage covered, not so much in the song as in the video. Hang on, that’s not fair — in the combination of the two. It’s certainly got me confused, and that’s how I’ve always estimated artistic value ’til now. If I don’t quite understand it there’s got to be something there.

Lyrically it’s a pretty traditional promise to transform a potential partners life, in this case through the similarly stock rap tropes of money and power. (Have you ever wished your life would change?) Combined with a video where Azalea is presented in a series of revealing outfits and ‘sexy’ situations. (Azalea will change it.) Skip to the point on the video where she’s fucking the guy (T.I.?) on the boot of his car. (That’s how she’ll change it.)

It reminded me of one of those pop-feminist circulars I read on Facebook recently, talking about how the concept of female virginity is a patriachal construct. Like the very nature of a woman is transformed by contact with the mystikal powers of a man’s penis. This could be a similar point. Azalea’s vagina will absorb you into a state of perpetual orgasm.

Besides, I’ve a soft spot for anything vaguely subervise and in the western world images (mental or visual) of women such positions of power are still pretty radical. Hence the uncanny power of Geri Halliwell. This isn’t quite psyche-rock legends Bongwater‘s proto-Spice anthem ‘The Power Of Pussy‘, but it could concievably be a nod in the same direction. Especially given how Azalea bombs T.I.’s car at the end. She’s the biggest bawse that you’ve seen thus far. Maybe.

But no, honestly, the real reason for posting it is cos I’m a hit-whore mood today and I’m wanting to see if there’s any mileage left in the age-old concept that there’s great profit to be had by a man with the heart to sell tits. Maybe I woke up, saw Icberg Slim’s book on my shelf and decided today would be a good day to indulge in a few materialistic fantasies. Tits for hits. Now The Sun has gone behind a paywall there might be opportunities in this area, if our SEO game is tight. That’s right, you suckers. Virtual reality, keyboard pimping. Iggy Azalea’s my ho. Don’t scoff like you’re above it. You clicked, right?

One comment on “Iggy Azalea will ‘Change Your Life’ by absorbing you into a state of perpetual orgasm.”

This entry was posted on September 9, 2013 by Ringo P in One For The Sun, Ringo P, The D is FREE and tagged Iggy Azalea, Koaste.