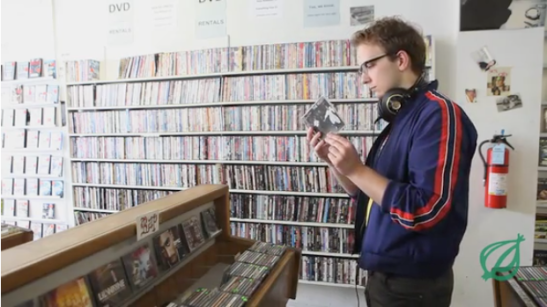 Sometimes you have to hold back for a while. Sometimes you can only hold back so long before you just have to speak up. When I first saw The Onion’s ‘There Are People In The World Who Are Concerned About Current State Of Hip-Hop’. I figured it’d be impossible for me to criticise without it sounding off-key, so I won’t. I can still see merit in that position. It’s the sensible stance to take, the path of least resistance. It’s be impossible for me to discuss the finer points raised by the piece, in which a white man makes a fool of himself pontificating about ‘black cultural awareness’ without it coming off sounding like sour grapes. But…y’know…I can’t ignore it, either. So here goes.

Fortunately for me, the first comment underneath Ego Trip’s reposting of the video phrases my first reaction perfectly, so I’ll c+p “Let’s all keep it real…if you frequent a quality site like this; no matter who we see as ourselves in the mirror……….THIS GUY; is who the entire mainstream world sees whenever we open our mouths to speak.” The commenter adds ‘ha ha’, and I’d like to agree with him, cos I know it’d make me look better than my actual reaction did. LOL, yeah, look at me: big man, I can take a joke. But, unfortunately, I’m the kind of asshole that has to be honest and admit my next reaction was ‘fuck the mainstream. Fuck their fetishising defeatism and narrow-minded stupidity.’

Allowing the fact that no white westerner knows shit about being black I dislike the snide insinuation which seems to follow: that it’s wrong for a white man to take interest in black culture. They’re clearly not just talking about appropriation here, the type of bullshit that sees Elvis hailed as the inventor of Rock’N’Roll, Eminem the King Of Rap. They’re implying more, that it’s a folly for him to be obsessing over something with no direct impact on his life, that he’d be better off thinking about “family, friends, his career or international relations”. As if this guy’s awareness of his total irrelevance to the bunch of asshole politicians who conduct our international relations is going to do anything but depress the hell out of him. As if trivia isn’t the most important thing in life. As if hip-hop isn’t appropriate to listen to or discus with family and friends.

So, yeah, fuck the fucking mainstream. Here’s the trivial shit I’ve been listening to recently.

Gravy
• No great surprise that Wariko of NewCamp smokes More Than Rastas. No great surprise about any aspect of the tune, really. Wariko is the guy whose Facebook feed introduced me to the dubious beauty of a ‘honey zoot’, a honey-dipped spliff rolled in enough crushed-up weed to floor all but the most hardened stoner. Intimidatingly expensive (unless you’ve got your own grow-op, I suppose) it also looked totally unsmokeable and…I really ought to get back to the track, right? The beat is typical Beat Geeks territory. Nottingham Grime, maybe a touch less hyperactive than the London equivalent? I dunno, can’t quite put my finger on their sound yet, but it’s distinctive and this is typical as anyone who’s heard either Wariko’s album or NewCamp’s recent mixtape should recognise. No, the big surprise comes when the first emcee who isn’t Wariko comes on and actually gives out the mobile phone number of his dealer. Unless he’s a dealer, in which case he’s giving out his own number. In either case, if you want cheese apparently 07974 442577 is the number to call. I would, but right now I’m too chicken.

• Not quite sure I get all the hate directed at Jammer‘s Declined. Is it cos the music’s shit, or is it cos the press release says Charlie Sloth shouted ‘rewind’ all over the top and played it three times in a row? If the latter, then fair enough, but try to be honest about it. I quite like the song, actually. Not as good as Murkleman, but then very little in life is as good as Murkleman so it’s not really fair to hold that against him.

• The main guy in the Astroid Boys‘ Minging looks a bit like Mac Miller, but I won’t hold that against him. Not when he’s obviously more a fan of Foreign Beggars and he manages to cram the line “you were talking about expensive cars, I was talking about my farts” into his first verse.

• Shystie‘s revenge fantasy Scumbag scares the fuck out of me in an appealing way. The track that Kelis’ golden oldie ‘Caught Out There’ should have been, the one moment of uncharacteristic niceness coming with the brief reassurance that she doesn’t hate all men. Thanks for that, Shystie.

• I met The 273’s showrunner Koaste for the first time this week. One of the first things I said to him was how I liked writing for his site, cos ‘I feel like I can cover anything’. I meant it, at the time. But then I got home and, in a fairly typical move for me, decided to test the boundaries of that a little. So, then. Anyone fancy listening to the new Miley Cyrus single? Hang on! Don’t run away! If nothing else it’s worth hanging around for a laugh, or as conversational fodder next time you’re stuck with a bunch of folk who don’t give a damn about rap. Furthermore, I can testify that We Can’t Stop is notable here cos she’s blatantly going for the urban dollar. To my ears it most definitely sounds like she’s trying to rip off Rihanna with the fake patois, ‘we run things, things don’t run we’ and confrontational attitude ‘it’s our party we can do what we want’. But it’s not even the cultural appropriation that bothers me here, it’s the simple fact that such beligerance as a statement of power (‘fuck you, I won’t do what you tell me’, essentially) sounds great coming from an underdog but nasty and oppressive coming from a position of power. I don’t know her personal situation, I’m not discounting the probability that rich white women can have serious problems, but I can’t shake the feeling that this sounds like an anthem for the yah-boos to snort lines off porcelain in toilets I’d never want to be allowed near. Or, if I was being a hell of a lot kinder, she sounds like a silly petulant teen nightmare. I bet those guys who made that video for The Onion love her.
• Ringo