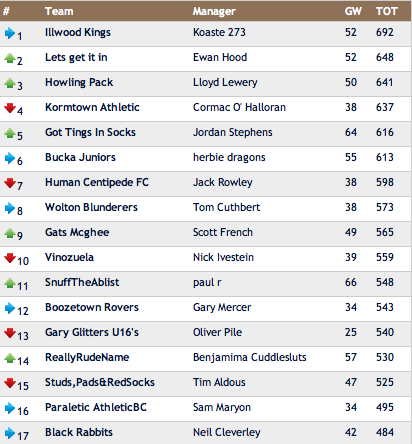 He’s only gone and done it again. After clocking up his first manager of the week award in week 12, Snuff The Ablist has confounded the critics and done it two weeks in a row. After languishing at the bottom of the table for most of the season so far, he’s now smashing it up the table. 66pts, 18pts each for Cesc Fabregas* and Gareth Bale sees him reach the giddy heights of 11th in the table.

Second highest scorer was Rizzle who moves up to fifth with 64pts for the week due to the same Fabregas/Bale combination, and third was Longusto with 57pts (Gareth Bale again… 18pts).

Manager of the Week: Snuff The Ablist

This entry was posted on November 15, 2010 by Koaste in 273 Fantasy Football and tagged Longusto, Maelstrom, Rizzle Kicks, Snuff The Ablist.