Although the Hope started off pretty quiet, presumably due to the hot weather we’ve been having this last couple of days, it wasn’t long till the heads were taking their places on the floor for the nights proceedings. The usual suspects were there in force for the open mic, Hinesy Hines acting as ringmaster for the verbal acrobats and of course, the clowns, although for once there didn’t seem to be a huge number of them. Maybe the threat of Shelly Mack, poised with his finger on the gong button was a sufficient deterrent. If so, he should come back next month for sheezay.

First live act of the night was Rizzle. Its a cliche to mention it, but at just 18 years old, this kid is mad talented. When I first started hearing recorded tracks from him, I was critical that his flow wasn’t tweaked correctly yet, and whilst still not 100% there in my eyes, the improvement has been exceptional, and whether he was spitting over Benga or Lilly Allen instrumentals, his ability to adapt to whatever track he’d chosen was effortless. Another year or two of grinding hard, and Riz could start dropping some serious heat.

The second act of the night was an emcee who’s had his fair share of run ins over the past years. Despite all this, the self proclaimed ‘bad guy’ seems to have mellowed out, but lost none of his venom on the mic. Its been a while since In Pursuit of Harmony dropped, and speaking to Words last night, there seems to be enough tracks recorded and ready to emerge to ensure that a new excursion hits the airwaves before long. Rocking through tracks including The Cro Debate, the set ended with Beautiful Life, which seemed fitting due to the current good weather, and the atmosphere amongst the crowd at the Hope.
• Koaste 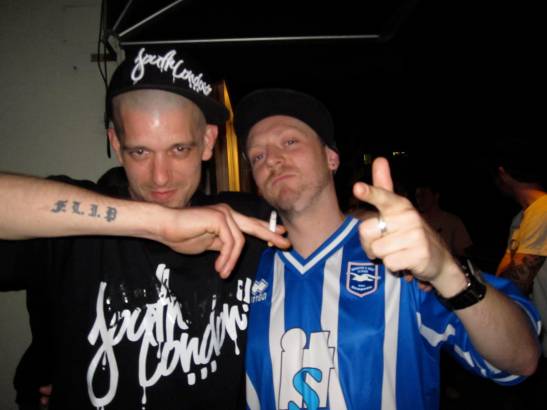 This entry was posted on June 5, 2010 by Koaste in 2wo 7even 3hree, Live From The UK and tagged Live Shit, Open Mic, Rizzle, Slipjam, Wordsmith.